As Tampa Fishing Charters we are so lucky to be able to not only utilize the Bay, but the offshore fishing is incredible and starts just a short distance of our beaches.  Heading out of the mouth of Tampa Bay to the north we have St. Petersburg’s beach.   St. Petersburg fishing is wonderful.  Head straight out, and there is an endless supply of artificial reefs, rock ledges and hard bottom 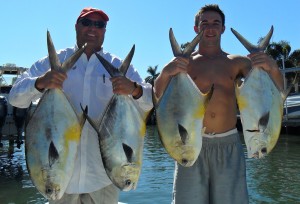 to fish around. Anna Maria Island fishing is some of the best on the west coast. Located at the mouth on the south end of Tampa Bay, it is a quick run from some of the area’s best flats fishing to the deep waters of the gulf straight off her beaches.

Tampa Bay Grouper fishing is probably the most popular of all the fishing we have to offer offshore.  Grouper are extremely abundant in the area. They are easy to catch as long as you can pull hard enough.  Most importantly they are great to eat.  Red Grouper, Gag Grouper and Scamp make up the bulk of the edible Grouper caught in the area.  Goliath Grouper up to 500 pounds make a fun challenge as well but must be released.

Snapper fishing is also very good especially for Mangrove Snapper and Red Snapper.  Like the Grouper they are bottom dwellers as well.  They can be a bit trickier to catch, but the action is hot; they are a lot of fun.  Snapper are tremendous eating; to some the best there is.

Tampa Fishing Charters targeting Grouper and Snapper will also pick up a variety of other bottom dwellers.  Flounder, Sea bass, Trigger fish, Grunts and even the unwanted to Stingray to name a few.  The bottom of the Gulf is alive with fish; something is always tugging on you line.  You really never know what is going to bite next.

It is not just the bottom fishing that is good the whole water column is teaming with fish.  Kingfish season is a busy time for us at Tampa Fishing Guides.  They are an extremely popular target and largely sought after for there fighting ability.   Averaging 8 to 30 pounds and larger when kings are biting as fast as the fisherman can get a bait in the water it might not get any better than that. Also mixed in with the Kingfish are False Albacore, the hardest fighting fish in the world pound for pound weighing up to 20 pounds.  Mackerel, always hanging out with the Kingfish, are fun to catch on light tackle and are great eating.

Huge Greater Amberjack are a favorite aboard Tampa deep sea fishing charters.  Sometimes topping 100 pounds as part of the jack family, they are built to fight.  Their smaller cousins the Lesser Amberjack are numerous as well fun capturing on light tackle and great to eat.

Permit fishing can be amazing off the coast of Clearwater Beach, St. Pete Beach and Anna Maria Island.  On the best days a charter boat may land more than 20 in a day.  Many 40 pound permits have been caught in the area.  Myself and many of my associates have reported seeing and hooking specimens over 50 pounds

Mahi Mahi also known as dolphin is a good time on light tackle in the Gulf.  Most of the ones in 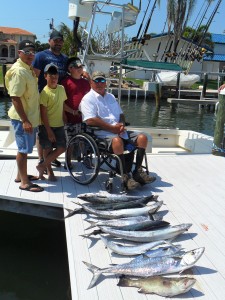 the Gulf are little smaller than the ones in the Atlantic; 5 to 10 pounds is average 20 pounds is big.  Tampa Charter Captains always feel they make a nice bonus; you never know when they are going to show up. They are get to eat and beautiful fish to look at.

Also when further out deep sea fishing, there is always the chance of a Sailfish or Black Fin Tuna.  Way out past 70 miles even a 100 miles or further, Wahoo, Marlin and Swordfish are found, but generally this far out to sea is not economically feasible for Gulf coast fishing charters.

Tampa bay fishing charters are really popular and world renown for giant catches.  The true heavy weights generally consist of the larger species of shark and Goliath Grouper.  The largest sharks can topple 1500 pounds.  Goliath Grouper is probably the most popular of the areas large offshore species for fishermen. ???? The success rate is high for a fish over 150 pounds.  300 pounds is probably an average Goliath Grouper.  They are great fighters; the whole experience from the 15 pound bait to the drag ripping of 200 pound class tackle is truly unforgettable.

Tampa offshore fishing is as good as you can find anywhere.   There is wide variety of species to fish for and something is always biting. As long as the wind is moderate the Gulf waters is a sure bet for an action packed angling experience.